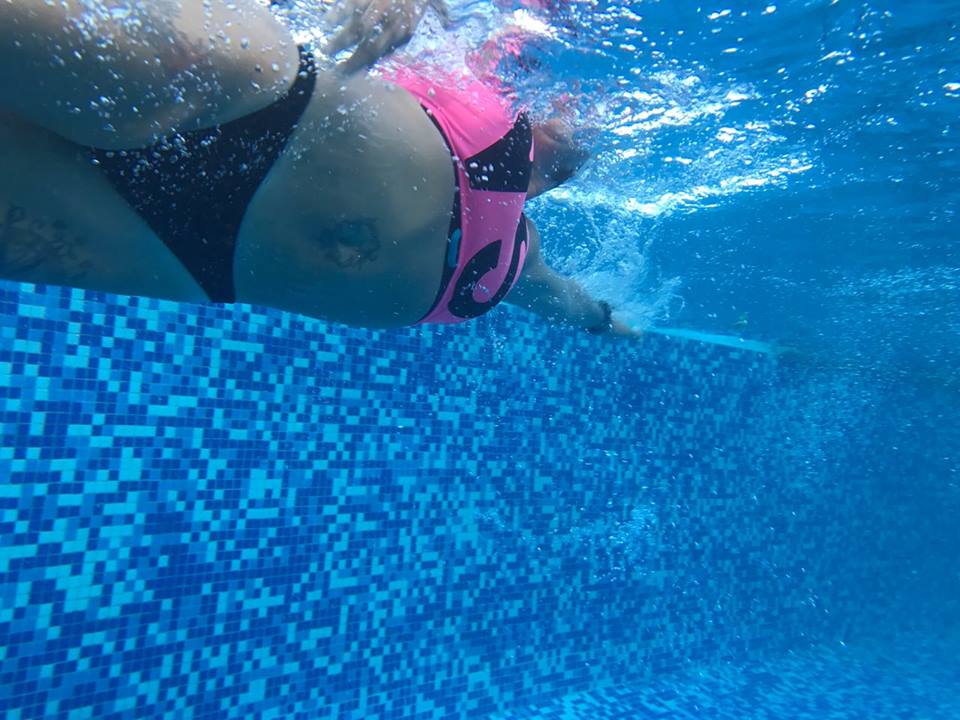 This once self-proclaimed couch potato has run, swum, and biked her way into a healthy, happy life. Linsey hasn’t always had it easy but she’s the kind of person that rises above anything that has tried to hold her down. She has learned to turn her personal struggles into fueling her better self, to get the things she wants, and to live her life to the fullest.

Linsey has battled a lifetime of depression that kept her overweight and unhealthy. When a debilitating trauma struck and Linsey was forced to make one of the hardest decisions of her life, she spun into an abyss of the deepest kind of darkness. But Linsey is a fighter. She turned to running as a way to get into shape and combat her struggle with the very personal and difficult life event she suffered. 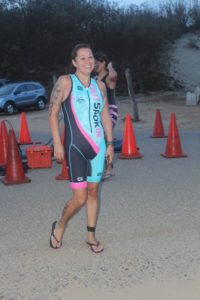 In October 2014. Linsey signed up for her first-ever run, the local Turkey Trot. It’s harder to back out when you’ve created expectation so she made sure to tell everyone she knew about it in hopes it would keep her accountable. That was the very first step toward her journey across what would become finish line after finish line and a new way of life. Her mantra became: goals and accountability. Keeping up the momentum of her first ever race, Linsey signed up for the Jingle Bell Run and then the St. Pete Beach Classic. She found the much-needed support and friendships in running groups. Before she knew it, she was a full fledged runner. Things started to quickly gain speed from there taking her down a new path towards triathlons.

When Linsey’s running partner broke her foot but wanted to keep up her cardio, she asked Linsey to join her for a swim. “Who doesn’t like swimming?” she thought. Turns out swimming was not just splashing around in the water and Linsey came upon her next challenge to conquer. While attempting the first few pool laps of her life, her friend suggested a triathlon.

“I didn’t even really know a triathlon entailed and I hadn’t ridden a bicycle since childhood, let alone own one. But somewhere between strained breaths and sheer exhaustion, I said yes,” Linsey recalls.

Together with her friend, Linsey signed up for the next available race, the St. Anthony Triathlon. They only had three months before the race and as it turned out it is the fourth largest race in the US.  There are professionals and Olympic medalists from all over the world that come out to compete. No big deal. So Linsey did what any sane and terrified first-time triathlete would do, she went out and bought herself a bike. She interviewed a co-worker who had triathlon experience to learn the basics like what to wear and how to change from swimming to biking to running. Afterward, she started training as much as possible.

Race day came. This was it. Linsey just focused on racing.

“I got through the swim using a very odd combination of freestyle, doggy paddle, and some weird side stroke I invented that day,” she recounts the experience.

Although imperfect, Linsey finished the swim and she wasn’t last!

She took that sliver of confidence and nearly lost it on the bike. However, she peddled on knowing people were waiting for her at the finish line.

In the final stretch of the run, Linsey remembers having tears flooding her face as the miles counted down.Less than 6 months ago, she was motionless on a couch. However, in that moment, she realized she was going to finish a triathlon! The self-esteem and self-confidence she gained from the race have changed her life forever.

What We Can Learn From Linsey

If you haven’t noticed a pattern by now, a little difficulty doesn’t slow this woman down. It only pushes her to work harder and do better. Linsey’s tenacity and drive are incredible. Since her first race, she has lost 50 lbs and gained 100s of friends. She is strong from the inside-out. She is a woman worthy of looking up to, to be inspired by.

Now Linsey is a self-proclaimed race junky. These days, you can find her running, swimming, and biking all over the globe while living her dream of traveling the world long-term.

2 Replies to “Meet Linsey DeLuca – A Runner Who Inspires”