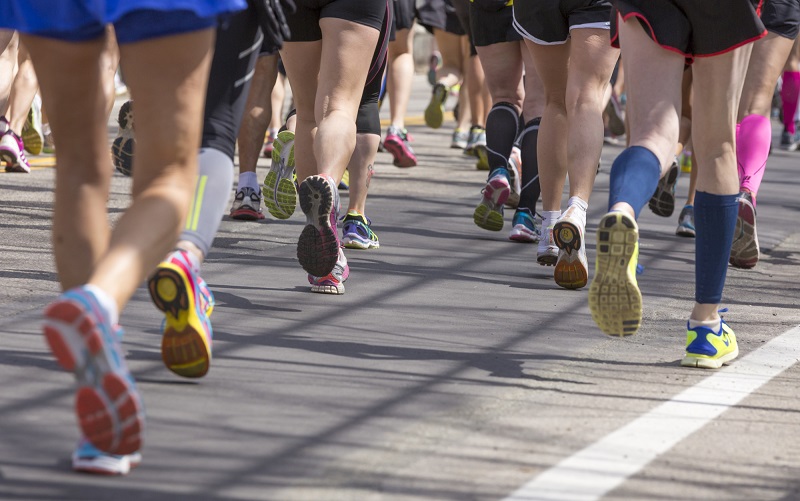 An elevation gain of 7,815 feet makes the Pikes Peak Marathon one of the top races on every runner’s bucket list. We think it has something to do with the stunning views, though.

Jutting pink granite and massive orange-toned boulders create a dramatic contrast to the green pine, spruce and firs below an ocean-blue sky. But despite its beauty, this marathon is a serious challenge to even the best runners.

Here are the absolute essentials you need to succeed at Pikes Peak.

Planning is of the essence. You can’t really start training early enough. But it’s important to ease yourself into a training program you’ll actually stick with slowly.

The best time to start training will be dependent on your current ability. You’ll want to increase your distance by 10% every week. So a little math will help you gauge where to start.

In addition to distance you’ll need to track your time. A GPS watch is one of the best investments you can make as a runner.

Set a goal pace that you’ll start easing into in short bursts and intervals. This will let your muscles know what they’re capable of, without overtraining.

If you’re already in elevations above 8,000 feet this is a non-issue, everywhere is good training for high-altitude. But if you live at a lower elevation, you’ll need to include this in your training.

Physiologists believe that it takes roughly two weeks for your body to adapt to high altitude. So the more time you can spend near Pikes Peak before the race, the better. But arriving one or two days before isn’t a deal-breaker. Commit to visiting and training in high altitudes once or twice every month if you’re driving distance from mountains.

A well-hydrated body will be even more important for adapting to altitude for people training in lower elevations.

Mastering your technique for effectively and safely running up and downhill is key to ranking well at Pikes Peak. The race is mostly uphill so you’ll need to train your body to sustain long uphill runs.

Start by training on trails or treadmills that allow you to interval train uphill. Slowly integrate hill training into your routine once every week in one-minute intervals. You can also change things up with tempo runs and fartleks.

Master your descending run too. Overstriding will slow and even injure you. You’ll also need to train your quadriceps for the intense downhill parts of the Pikes Peak trail and help prevent muscle fatigue.

The peak is famous for its steep and most challenging trail sections at the beginning of the race known as ‘The Ws.’ You need to train to find a balance between conquering steep inclines and declines in good time and not overexerting yourself.

After ‘The Ws’ there is still eight miles of trail, so don’t go out too fast. Expect yourself to take longer in the beginning and to make-up speed later.

So you’ll need to build a mind and body energy reservoir to release around mile five. Adding workouts like vehicle bumpers, step-ups and other accessible boosts during your run will help.

Training on uneven surfaces will benefit your muscles more than training on flat surfaces. It improves your balance and builds smaller, different muscles than running on a sidewalk or street.

All runners know that at the core, running is a mental game. Having support and keeping your head in the game will get you far. Our customizable jewelry for runners is made to help athletes keep their focus during races like the Pikes Peak Marathon.

Check out our jewelry here!