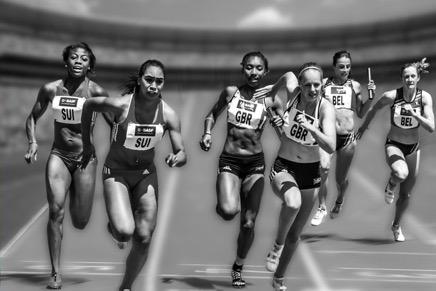 Speed is not the only difference between running and jogging. With the two, your body burns calories and uses muscles differently. We’re going to explain what happens when you jog and run, and they’re each beneficial to you.

Jogging is a form of running at a moderate, steady pace. According to BBC Sport’s conditioning coach Mike Antonia, jogging is at a speed of 6 mph or lower. At this pace, you would still be able to hold a normal conversation without running out of breath. Although jogging occurs at a slower pace, a 130-pound woman still burns around 270 calories by running at a speed of 6 mph for 30 minutes.

Did you know jogging is also known as “easy aerobic running”? Not only is jogging good for a warm-up exercise, it’s also helpful in building up your endurance and burning calories over a longer period of time. Since jogging has a steady pace, it’s less strenuous on your body and allows you to run a longer distance.

Running generally consumes more energy and burns more calories. Your feet will make shorter but more frequent contacts with the ground as you run. Once you go beyond the 6-mph speed, you would find it harder to talk while you’re running. When you’re sprinting at a fast pace, you also activate the Type 2 muscle fibers, which enable the explosiveness in your leg muscles. The higher ratio of Type 2 muscle fibers partly contributes to why Usain Bolt can run so fast.

Since running happens at a faster pace and a higher intensity, it also yields a higher caloric burn. A 130-pound woman can burn around 340 calories by running at a speed of 7 mph for 30 minutes. The intensity of running also produces an “afterburn” effect where your body tries to restore oxygen and continues to burn calories up for about 14 hours even after you’ve stopped running. Although running has a greater impact on weight loss, it imposes more pressure on your joints so you should take precautions to avoid running injuries.

Should You Run or Jog?

Running and jogging are not mutually exclusive.

Whether you like to run or jog, you should always start your workout routine with a warm-up jog for 5 to 10 minutes. A light jogging helps to flush out the lactic acid in your muscles and prepares you for a good run. If you’re training for a marathon, jogging a few miles daily at a slow pace will also build up your mileage.

Many runners also like to alternate between running and jogging to increase their overall speed and muscle strength. It doesn’t matter if you prefer jogging over running, or vice versa, as long as you’re comfortable with your own pace. Even a brisk walk can burn calories and yield health benefits!

There is more than one path to achieve your fitness goal. Whether you choose to walk, jog, or run, we at Inspired Endurance are proud of your effort and dedication to leading a healthy lifestyle.